Fishermen-turned-entrepreneurs who have been financing the protection of endangered whale sharks in the Philippines have hit on a successful scheme to help lift their coastal community out of poverty, new research has found.

A group of 58 fishermen from the town of Oslob who were struggling to feed their families turned to the world’s largest fish species to set up a community based dive company in 2011. It has since become an international hotspot for tourists to swim with the sharks, attracting more than 750,00 visitors in the first five years and amounting to $18.4m (£14.7bn) in ticket sales over the same period.

The attraction, whereby former fishermen take tourists out on boats to observe, swim and dive with the whale sharks, has not been without controversy. But now scientists claim the unique business model has improved food security, healthcare and education in the community while also safeguarding the species, that is protected by law but illegally poached and finned alive in other parts of the country.

An analysis of how Oslob Whale Sharks (OWS), run by 177 former fishermen in partnership with local government, has impacted on livelihoods and the environment has been published in the journal Ocean & Coastal Management.

“Oslob, in the province of Cebu, is one of the poorest fishing sites in the Philippines but also anywhere in the world,” said Judi Lowe, a marine scientist at the Southern Cross University in Australia who led the research with Johann Tejada at the Bureau of Fishery and Aquatic Resources.

Lowe said, before the creation of OWS many of the fishermen could not afford to put food on their table or educate their children, while some had lost their palm frond homes in typhoons.

Former fishermen Jesson Jumuad who leads a team at OWS said: “As fishermen we were earning as little as $1.40 a day but nothing on days when the current was strong.

“Sometimes in a day I didn’t have any fish to be sold but now I can give my family good food three times a day. I have built a brick house, bought a motor bike and can afford to send my daughter to school.”

Historically, food security in the area has been an issue due to years of overfishing and the destruction of coral reefs. Between the 1950s and 1980s Oslob was home to a destructive form of fishing called muro ami, whereby a fleet of boats run by local elites used child slaves to bring in catches, explained Lowe.

More than 30 vessels carrying around 350 crew members each would stop in various locations so the children could dive down together forming a human curtain. Using rocks on ropes they would pound the coral reefs until the fish would run into the nets.

“They smashed up the reefs leading to diminished fish stocks, deepening the poverty of the fishing community in Oslob,” said Lowe.

Despite poverty, the fishermen of Oslob, unlike elsewhere in the region, never hunted the whale sharks, filter feeders that can grow up to 12m long. Their connection with the creatures spans generations who knew how to lure them away from their nets with handfuls of krill should they bump into the canoes they used for fishing. 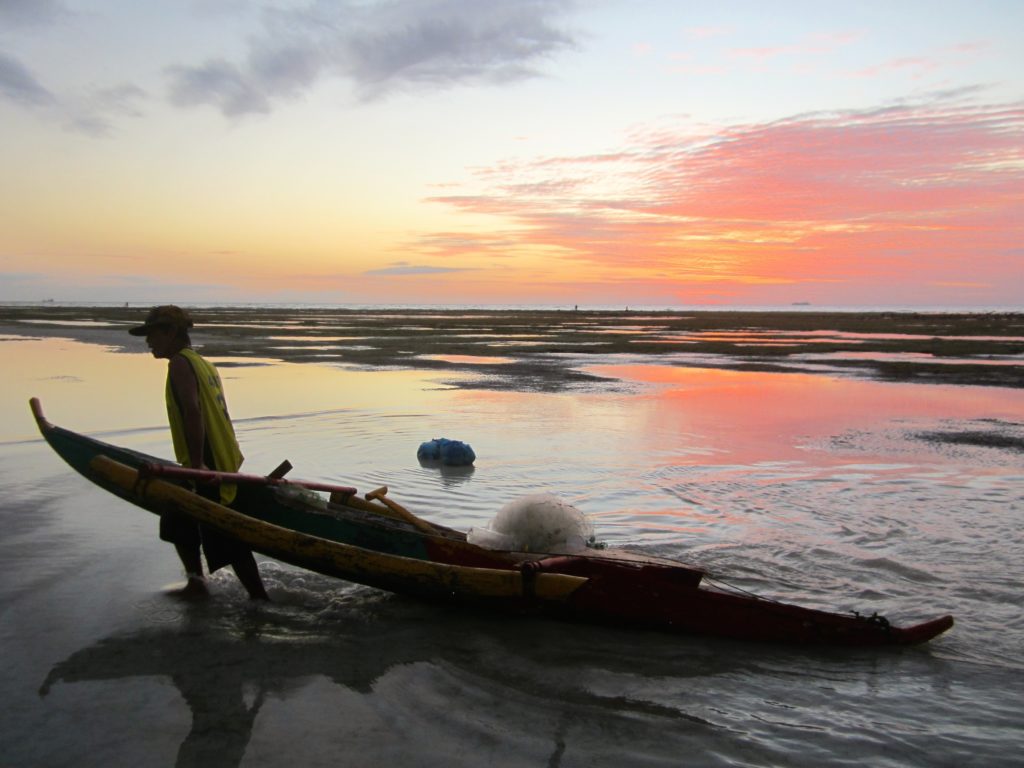 An oslob fisherman returning at the end of the day. Photograph: Judi Lowe

But it was not until 2011 – when a tourist paid a fisherman to draw a whale shark close to shore to get a proper look – that the idea of using the species as a source of income was born. Now the local fishermen paddle tourists out to watch, snorkel or dive with the sharks 364 days a year from 6am to midday. Feeding is tightly controlled with only the best fishermen becoming specialist feeders who will manoeuvre their tiny canoes in currents and swells.

“Our research found that income stays in Oslob, providing livelihoods, increased food security, healthcare, education and housing for the community while protecting the sharks and the coral reefs their livelihoods depend on,” said Lowe.

While 60% of the business is owned by the fishermen and 10% by the local village of Tan-awan, 30% of the profits go to the local authority which uses the funds to employ sea wardens who protect the coastal region from poachers or those using destructive fishing practices.

The Philippines outlawed the hunting of whale sharks in 1998 but illegal poaching continues with the sharks’ fins exported and sold on the black market.

As well as the protection of whale sharks, money generated helps finance tourism and community infrastructure, health, education and social welfare programmes in Ta-awan and Oslob, as well as the management of five marine reserves.

The study found that while expatriate and national elite-owned dive tourism can undermine local livelihood benefits – the OWS model has shown how community dive tourism without donor funding can bring big payoffs for fishers and their communities. In addition, the business helps conserve the marine environment by reducing the fishing efforts of 177 fishermen.

Research investigating the physical impact of feeding the whale sharks, from the same team, in collaboration with a specialist whale shark scientist, is due to be published early next year. 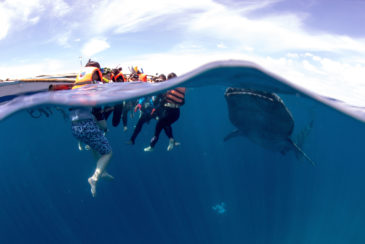